We join with Pamela Geller of Atlas Shrugs in our consternation of these huge fires in Israel, remembering that Israel is a very small country, about the size of Munster

Our thanks to Pamela Geller for this coverage. I include the first 2 comments as well but visit the site to read all of the comments:

Pray for Israel: Deadliest Fire in History, Netanyahu Describes as a “Catastrophe the likes of which we have never known”Please pray for Israel this night. Tirat Carmel, Haifa neighborhoods evacuated as giant blaze threatens homes in northern towns. Firefighters say Israel will probably not be able to battle fire on its own, authorities counting on help from abroad

Residents of the northern city of Tirat Carmel stood shocked before a wall of flames Friday, after some 5,000 of their neighbors had already been evacuated from their homes. Firefighters are still trying to fight the massive forest blaze that overtook northern Israel Thursday evening and claimed the lives of some 40 people, with the Jewish National Fund declaring that nearly 5,000 acres had already gone up in flame. Authorities in Haifa say they do not believe Israel can overcome the fire on its own, and it appears the state is counting on outside help. “Six planes, each carrying six cubic meters of extinguishant, could put an end to this crazy fire,” Haifa Firefighters said.

The first to respond to Israel’s cry for help was Greece, and one of the country’s planes landed at the Ramat David base overnight. It is expected to fly into action soon. A Bulgarian mission, a plane carrying a hundred firefighters led by the country’s deputy foreign minister, is also at ready. Overnight more than 15,000 people were evacuated from their homes, with flames reaching the entrance to the Druze village of Isfiya as well as an IDF prison evacuated earlier. The Greek plane, the first of four which are expected, brought much needed fire retardant supplies and additional firefighting forces who will join Israeli fire crews battling the uncontrolled Carmel forest fire.

Arson likely
Channel 2 reporter Yossi Mizrachi said that the way in which the fire spread indicated that the blaze erupted from three locations simultaneously — making arson a likely possibility.

Deadliest fire in Israel’s history leaves 40 dead. Netanyahu describes fire as a “catastrophe the likes of which we have never known”; appeals to Russia, Italy, Greece and Cyprus for help; declares national day of mourning for victims CiF Watch

Northern Israel was in a state of emergency on Thursday night as the deadliest fire in Israel’s history, in the Carmel Forest near Haifa, brought life to a halt in communities near the blaze. As the blazing fire, which started running wild on Thursday (Dec. 2) afternoon, continued spreading in the Carmel Forest near Haifa (northern Israel) annihilating over 750 acres, a bus carrying as many as 50 passengers overturned en route between kibbutz Beit Oren and Damon Prison, allegedly after the driver lost control of the vehicle because of the fire and surrounding smoke. 40 people have been killed and ten were injured. There are reports that Carmel Hospital may have to be evacuated. 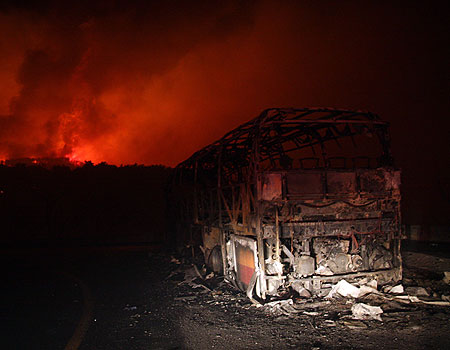 The IDF allocated all of its resources on Thursday to assist the Fire and Rescue Service in battling the blaze.  The IDF Home Front Command had established a command post near the scene of the blaze and was coordinating relief efforts together with the Northern Police District. The IDF sent the Northern District Police Commander, IAF helicopters, hundreds of soldiers from local education bases, tens of medical crews including medics and doctors as well as medical supplies and two army battalions to help put out the fire and carry tanks of water.

There are only 1500 firefighters in Israel and the nation has run out of flame retardant chemicals. Respondin

There are few things to equal the terror and horror of a wildfire that sweeps into communities. If these are found to have been set by Jihadists they should be considered acts of war. Didn’t they do this to Greece a couple years back?

Yes, and as I recall, the media studiously hid this most crucial point about it. That was unspeakable. (One cellphone-rigged incendiary backpack that had failed to detonate was actually found in some woods. The other backpacks apparently did detonate).

And how do you suppose *this* forest arson will be *whitewashed* to shield jihad?

And who will be next?