We think it is very significant that the attack was on government, was on children, and was on labourist children

What a crime that Charles Johnson has been using this horror terrorism to try to blacken the name of people like Pamela Geller. Indeed…

THE BEST REPORT IS BY PAMELA GELLER

(on her blog Atlas Shrugs, not one article but many articles)

Like Pamela we on 4international have only one interest, which is to get to the truth of who did this dastardly deed and why… 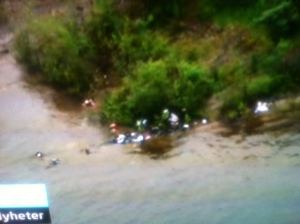 According toa  tweet from Hashim0307, this is the first pic from the shooting at the camp. He says it depicts bodies in the water. hat tip Fern.

The mass murderer who mowed down teenagers at the Utoya youth camp in one of multiple attacks in Norway today was seen in Oslo prior to his attack at the youth camp. After the Oslo blast he went to Utoya, dressed as a policeman, and in order to gain entry to the the youth camp, said he was on security detail in light of the Oslo bombings. Got that? He got through security and opened fire on the children.

It takes an evil of unimaginable depravity and barbarity to conceive and execute such carnage.

Witnesses on the island told Norwegian television that the man identified himself as a police officer when he entered the camp. “He said it was a routine check in connection with the terror attack in Oslo,” one witness told VG Nett, the Web site of a national newspaper.

Bjorn Jarle Roberg-Larsen, a Labour Party member who had telephone contact with teenagers on the island, said: “Kids have started to swim in a panic, and Utoya is far from the mainland. Others are hiding. Those I spoke with don’t want to talk more. They’re scared to death.” NY Times

Anita Bakaas told the BBC her daughter was on the island when the gunman hit, but managed to hide in a toilet with some friends from where she sent her text messages. Ms Bakaas said her daughter could hear gunshots the whole time. “It was scary, scary, scary.”

Oh, and if I hear another television or radio reporter refer to muhammad as “the Prophet Muhammad,” I think I am going to puke. He’s not your prophet, assclowns.

gunman dressed as a policeman opened fire at a summer youth camp on a Norwegian island near Oslo, according to media reports. A witness told Norwegian television of seeing 20 bodies on the shoreline of the island of Utoya, but a police spokesperson said ten people are confirmed dead.The shooting at a camp run by the Labour Party, the political party of Norwegian prime minister Jens Stoltenberg, occurred just hours after explosions ripped through a government building holding Stoltenberg’s office in the capital city of Oslo, killing seven and injuring more than a dozen.

A suspect is under arrest, and police say they believe that he is also linked to the explosion in Oslo.

UPDATE: The Telegraph:  unconfirmed reports of up to 30 dead. 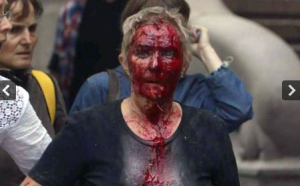 At this stage who knows who this killer is and whether he acted alone, or was part of a wider and sinister group.

As I write the information is that he is a Nazi, right wing individual.

I feel personally that it is highly significant that he attacked

Even though I am unsure of who he is, or who they are, one thing is for certain.

But we on 4international will have none of this. We will not be hemmed in. we will seek to explain the truth (as we see it) at every point.

One of the issues involved in politics today is that the capitalist system is in deepening economic crisis, with consequent political and social crisis.

It will also seek allies in conservatism morphing into Nazism

And it also seeks allies in deranged “leftist” people, who can be used to attack genuine freedom fighters.

Such an example of the latter is the way that the whole truth movement has been diverted into hatred of Israel, the Israeli state, of Zionism and therefore we argue necessarily of Jews. It becomes anti-Semitic.

There are great lessons from the 1933 period when the capitalist and labourist forces were unable to provide an answer, and where the Nazis mobilised the forces of the enraged (by the crisis) middle classes and lumpen proletariat classes in order to seize power.

Once state power was in the hands of Hitler he moved very rapidly to destroy the trade unions, the organisations of the workers, all opposition even women’s groups and any kind of independent organisational situations.

Thus, apart from the tragedy of loss of life in Norway, these kinds of actions have a very unsettling effect on society at large.

Leadership is the key.

The creation of our party, 4international, in order to analyse and lead in these situations is critical and vital.

The Norwegian ruling capitalist class, which is mainly represented by their leftist social democratic governments, have been the most anti-Semitic and Jew hating on earth. As has been the whole of Europe, the Brits, the Irish, the Spanish of the PSOE Zapatero etc., and now they are not crowing and pontificating against Israel this morning.

The anti-Semites of the government now realise they have their own problems.

Will that lead them to stop attacking Israel and to have sympathy with Israel?

I would hardly think so. The left in Europe and the world is anti-Semitic. Yet the future lies not with capitalism but with socialism. Which simply means that 4international has to lead.