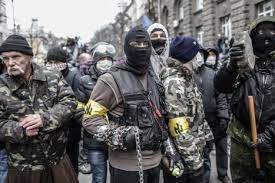 This has taken over in the Ukraine. Are Geller Spencer and Belman holocaust enablers?

Why are the so called Jewish blogs like Israpundit silent over this?

There has been a Fascist takeover of Ukraine and Ted Belman of Israpundit has taken NO position. Belman never takes up any position on anything until…like…everybody else has moved

But nobody is moving.

Not Spencer Not Geller noone!

What this means in effect and in reality is that the Jews are being led by an elite which does not fight against Fascism, despite what the Nazis did to their people in the Holocaust