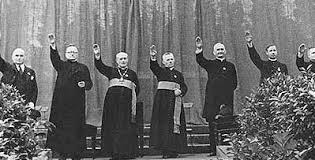 The issue in the world today is very simply Antisemitism. It is Antisemitism which separates all political tendencies.

The Vatican is very much a political tendency. It is clearly a political organisation. Pope John Paul in his visits to Poland and elsewhere was deeply involved in bringing down the whole system of Soviet Russia. You may agree or disagree with that. What you cannot deny is that he was a political operator.

What has that though to do with Antisemitism? Surely the Vatican is not Antisemitic.

Well the Vatican helped thousands of Nazis to escape to places like South America, even putting them up in the Vatican, prior to secret embarkation.

Now Pope Francis is on Monday going to visit the “Palestinians” and call for them to have a state. This is even though Francis knows very well that the recent poll shows that Antisemitism is rife in the Palestinians.

“The most anti-Semitic countries and territories were led by the West Bank and Gaza, where 93 percent of the adult population holds anti-Semitic views”…

Pope Francis is calling for a state for THAT!!!

Is THAT not worth talking about when the visist of Pope Francis is talked about on the Media, such as the BBC?