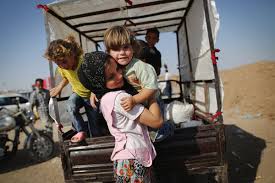 Obama backs these savages. Obama bullies and threatens Israel to submit to these savages. Obama on the side of jihadists every time. America has been hijacked. This is a crime against humanity. Three sweet young boys in the clutches of the undead. Good, decent people stand with Israel. Nazi imagery. – See more at: http://pamelageller.com/#sthash.frxWTIr3.dpuf

As the global Islamic jihad against Christianity and Christians continues to rage and escalate, will Christian leaders in the West finally wake up to the reality of it? Or will they continue to deceive themselves into thinking that if they keep quiet about it, their “dialogue” with Muslim leaders in the West will finally bear some actual fruit?

More on this story. “Christians in their thousands flee terror in Iraq Islamic jihadists rampage through city of Mosul,” UCA News, June 14, 2014:

The news of a church under construction which exploded east of Mosul is already on social networks. Together with the news that the monastery of Mar Behnam – dating back to the fourth century, one of the most important historical sites of Assyrian Christianity – is in the hands of militants of the Islamic State of Iraq and the Levant since yesterday, after taking control of Iraq’s second city.

Many question marks are also concentrated on the fate of the churches in Mosul itself, hastily abandoned by the clergy and the faithful who, despite all the suffering experienced by Iraq over the last decade, had always had the courage to remain. Now, they too are among the hundreds of thousands of refugees fleeing towards Kurdistan.

With the dramatic news that has been arriving from Mosul since yesterday, there is also the totally particular drama of the local Christian community, struggling with the nightmare of a jihadist militia which they know well and who have already shown what they are capable of in the Syrian province of Raqqa.

There is an email that expresses all the drama of the climate that reigns in these hours in Northern Iraq, sent last night by a Dominican religious in Mosul to his provincial superior: “I am writing in a critical and apocalyptic situation. The majority of the inhabitants of the city have already fled their homes and have ran away to the villages; they sleep out in the open without anything to eat and drink. Thousands of gunmen of the Islamic State of Iraq and the Levant have attacked Mosul in the past two days. They murdered adults and children. Hundreds of bodies have been left in the streets and in the homes, without any mercy. Even the Army and the regular forces have abandoned the city, along with the governor. From the mosques you hear the cry: “Allah Akhbar, long live the Islamic state”.

From the message you can imagine that even in Qaraqosh – the most important town of the plain of Nineveh, where in recent years many Christians had taken refuge – the situation is disturbing. A Dominican religious wrote yesterday: “Qaraqosh is flooded with all kinds of refugees, without food or accommodation. The checkpoints and Kurdish militias are preventing many refugees from entering Kurdistan. What we are seeing and we are living in the last two days is horrible and catastrophic. The monastery of Mar Behnam and other churches have fallen into rebel hands … and now they have arrived here and five minutes ago they entered Qaraqosh. We are surrounded and threatened with death … Pray for us. I’m sorry but I cannot go on writing … They’re not very far from our monastery

If you google this (wsws jewish boys kidnapped) you will find that the wsws has not written one Word. Cowards and traitors to Trotskyism!

Google the Irish Singer Christy Moore and you will find Moore ignoring the kidnapping of the 3 Jewish boys even though Moore has so much to say about “Palestinians”.

4international believes that Obama and previously Bush were helping the Jihad of Islam against Jews and Christians.

Later Mubarak and Gadhafi followed and the removal of these secular leaders opened the door for the great suffering that Christians and Jews are now suffering in the Middle East at the hands of Jihad. Of course Obama will not send tropos nor will cameron and Hague since they are on the side of Jihad when it comes right down to it.

There is a direct line between the scourging of Christians in Iraq and the kidnapping of the 3 Jewish boys in Judea.