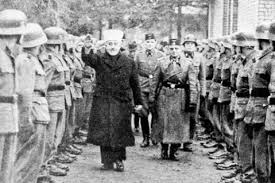 This is the essence of “Palestinianism”…he founded it

Jew hatred is the Spring Wheel of the Koran

They shout for massacre by Jews of Arabs because they are politically bankrupt. Their empty shouts are related to their political bankruptcy. They are also completely opposed to socialism, communism and Trotskyism (they glory in the name of Jew but they are communist hatersm that is fascists. …and Ted Belman the editor keeps on his site as main commenter a Fascist who seeks the murder of Trotskyists.

The whole of the Israeli elites are bankrupt and that includes all of the blogs and commenters, all without exception.

The issue for the Jews of Israel, that is the Jews who have found refuge in Islam, a refuge against Antisemitism, is that the capitalist system is changing or morphing towards Fascism and one of the forms of this Fascism is the movement called “Palestinianism”.

The “Palestinians” is or are the continuation of the Third Reich, and coming out of Islam is devoted to one main thing the destruction of the Jewish people.

Jew Hatred in the Koran is not something which occurs. It is the SPRING WHEEL of the Koran.

There is need now for a Trotskyist Party in Israel which will be based on these concepts.

It means in concrete form that what we say is true. The Jews and Muslims cannot live together without the Muslims making war on the Jews.

www.4international.me is unique in these positions.

It is not just that we are unique in the Jewish struggle to survive as a Jewish nation. We are unique period.

We mirror an event in history which is unique and which all forces struggle to hide. Leon Trotsky as the 1930s came started to emphasise that nation and nationalism were important concepts.

Islam does not have nation, that is the central point. But Zionism is the classic national liberation movement far outpacing in every way Irish nationalism.

The great power of Leon Trotsky in the 1930s is really his tenacity more than anything else. He continued to struggle in the midst of enormous personal tragedies.

But the legacy of Trotsky in the 1930s is enormous. He came to the rescue of the Jews in the 1930s and was the main advocate for the Jews setting up their state, their territory with spiritual essence also, in the Palestine area.

What Israel and Jews today must do is this: they must take complete possession of Judea and Samaria, every inch of it, and also all of Gaza and Golan, and the world must be told to make provisions for these Muslims. Since Egypt created a cold peace and not a real peace, a coldness which still exists under el Sisi, the land of Sinai must also be taken possession of.

Therefore those are the borders to defend by force of arms, the River, the Sea, the border with Egypt

Meanwhile the Jewish leaders and blogs are nearly silent on the murder of the Christians in Nigeria. That must change. Many things must change. There is above all need for the Trotskyist Party in Israel.

If you agree with us above help us to build it.