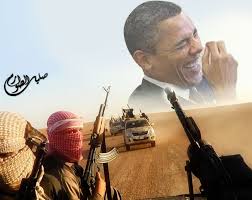 America tuned in to hear how Obama planned to defeat the Islamic army conquering whole swaths of the Middle East. Instead Obama took to the prime time airwaves to proselytize for Islam.

Obama is the true Mohammedan. He claimed:

Now let’s make two things clear: ISIL is not Islamic. No religion condones the killing of innocents, and the vast majority of ISIL’s victims have been Muslim.

Thus today on the anniversary of 9-11 there is still this ideology in the world that tries to paint Islam as being a religión of peace.

This is the key concept that we on 4international want to concéntrate on. Of course ISIL has EVERYTHING  to do with Islam

As the main scholars of Islm today are pointing out continually every beheading, every burying of humans alive, every single barbarity, is being inspired by the Korana nd the Hadiths

Last night as I thought on the anniversary of 9-11 I wrote this, some of it takes up the issues of leadership:

The reason that the left did not oppose this atrocity is because of the influence of Stalinism and revisionism which itself did not centre on 9-11 but happened a long time before. The left had betrayed the method and principles of Marx, Engels, Lenin and Trotsky.

When Leon Trotsky was murdered by the Stalinist assassin Ramon Mercader, recruited out of the Spanish Civil War bloodbath, it was not only Trotsky but a whole cadre leadership which had been wiped out by the Stalinists and the Fascists, with the ID OFof the capitalist imperialist countries like Britain and US

Thus Trotskyism was left without leadership. There was thus no continuity. The person who became known as Tony Cliff was never a Trotskyist, nor was Isaac Deutscher the biographer of Trotsky.

There was a vacuum in 1945. Into that vacuum were sucked in a new layer of leadership into left wing political life.

A big turning point which had great influence was the defeat by the Jews of Israel not only over the armies of the Arabs but by those armies now supported totally by the Stalinists of Moscow in 1967. This was the qualitative year.

The important book Phantom Nation had spelled out in detail how the phenomenon known as the “Palestinians” came into being in 1967, not before. It gained this huge traction in 1967 because from then on it was sold as a commodity

Who did the selling?

All of that is clear. But there is one other force often overlooked and that is the Jewish leadership of Israel

What did they do well in fact they both did nothing and did a lot.

This is a fact. The leadership of Israel while fighting in a patriotic and brave manner in 1948 was a middle class and a petty bourgeois leadership

This leadership did one thing which was fatal. It did not fight this new concept of “Palestine” but adapted to it. They adapted to the nascent Antisemitism

Before the Palestinians were the Jews. The most patriotic Jews saw themselves as Jewish Palestinians

The Arabs did not like the term. They continually called themselves “Arabs” and sometimes “Arabs of Southern Syria”.

The middle class Jewish leaders drowned themselves in a mythology divorced from the reality of the present. They could have contested the Arabs ove the “Palestine” name. A lot was at stake. It was really their first and massive betrayal.

These were not Marxists or Trotskyists. They were Jihadists on the left.

The first expression of this was the conspiracy industry. The Left Jihadist Fascists resurrected conspiracy in order to cement their alliance with Islam Fascism

The point is not whether US Imperialism were not in bed with the Jihadists. They were in one way or another. For example their multiculturalism was allowing the Jihadists to flourish in Bosnia, Berlin or London

But the Jihadist and anti-Marxist left had become a vehicle for the Jihad.

That was why this massive conspiracy industry suddenly sprang up. They were not seeking truth so much as providing a cover for Islam and so that has remained to this day.

And still centres on the “Palestinian” basura.