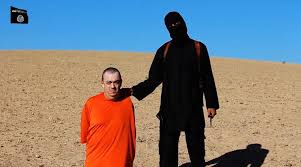 The picture shows Alan Henning as the next victim of the Islamic State. The man in black is the British Jihadist. The story involves also the role of the British Government, the BBC and the British muslim groupings and leaders, along with many many others

The question which we Trotskyists are asking is whether Alan Henning (voluntary aid worker from Eccles, Salford in Greater Manchester) was set up in Britain for kidnapping and beheading by the Islamic State BEFORE he left on his fateful journey. We think that Alan was a non-political type, full of goodness, but this led to him being unaware of the reality of Islamic Jihad. His British born colleagues in the taxi firm in which he worked were very afraid (instinctively) of the situation but most likely they too did not have the information at hand to really and fully warn Alan of the terrible trap that was being sprung around him by Jihadist forces in Britain. All those Jihadists in Britain are now in the frame for investigation as indeed are the British Government of Cameron and especially Theresa May along with the BBC.

First up in our quest to know more is this report from the Charity Commission. This is from April in this fateful year of 2014

The Charity Commission has opened a statutory inquiry into Al-Fatiha Global.

The inquiry is investigating serious concerns about the governance and financial management of the charity.

The Commission had been monitoring the charity since 2013, and the inquiry, which is the most serious level of the regulator’s investigatory work, opened on 21 March 2014.

The charity’s objects are to relieve sickness by providing free clinics for the people of northern Pakistan and to provide humanitarian aid globally in areas disrupted by conflict and natural disaster. Its activities include organising and participating in convoys to Syria.

The regulator says it is investigating:

Whether the trustees are effectively discharging their duties under charity law with particular regard to the proper accounting for the income and expenditure of the charity, and the management of the charity in accordance with its governing document and the law.

Regulatory issues in connection with reports in the public domain alleging inappropriate links between the charity and individuals purportedly involved in supporting armed or other inappropriate activities in Syria. (our emphasis FQ)

It is the Commission’s policy, after it has concluded an inquiry, to publish a report detailing what issues the inquiry looked at, what actions were undertaken as part of the inquiry and what the outcomes were.

The Charity Commission has issued regulatory advice under section 15(2) of the Charities Act 2011 to charities about the risks involved in working in conflict zones such as Syria and trustees’ legal duties and responsibilities.

It has been alledged that an Al-Fatiha Global initiative, Aid for Syria Convoy, included trucks named after the terrorist Aafia Siddiqui, who was found guilty in a US court of attempted murder, armed assault, using and carrying a firearm and assault on US personnel.