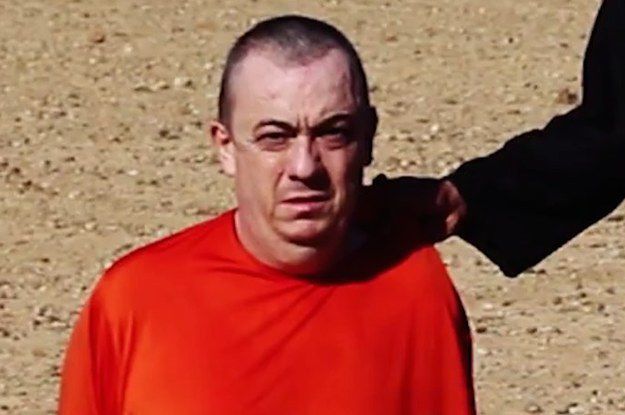 The murder of Alan Henning was awful, a terrible murder and it has left a deep mark on Britain.

There is no doubt in my mind after Reading through the various writings on this issue that Henning was surrounded by Islamist organizations all having their roots in the Muslim Brotherhood. No doubt either that Henning had nowhere and noone in Britain to turn to in order to clarify what was happening to him. Indeed his own Government elected by the people, the Tories, were under Cameron and May in league with these very Islamist organizations.

The BBC was giving out a daily diet of collaboration with these Islamist organizations. The Labour Party were conniving continually with the Islamists. Leftist spokespeople like George Galloway were totally in bed with Islam. No understanding of Islam and especially how Antisemitism is deeply rooted inside of Islam could ever reach the ears of Alan Henning.

Alan’s friends, working class Manchester friends, in that working class type taxi firm, were instinctively very afraid for Alan but they themselves had no real knowledge of the situation in Britain so could not warn him in an adequate way.

I insist that the beginning of understanding of this crazy situation in Britain and elsewhere is to go back to an analysis of the Koran (whatever path you choose) and to pause and pay attention to the analysis of the much derided Karl Marx on the issue. I have sourced this previously so for now he roughly said that Islam divides the world between believers and non-believers.

Advice now to everybody if you know your way around computers (and if you can download kindle it is very easy here), look up the book “The Islamic Doctrine of Christians and Jews” by Bill Warner

Even if you only download the free fragment which often comes with these kindle books to encourage you to buy! At least get your hands on that.

Under the heading of “Kafir” Bill Warner states “The Word Kafir will be used in this book instead of “unbeliever”, the standard usage. Unbeliever is a neutral term. The Koran defines the Word Kafir and Kafir is not a neutral Word (my emphasis FQ). A Kafir is evil, disgusting, the lowest form of life. Kafirs can be deceived, hated, enslaved, tortured, killed, lied to and cheated. So the Word “unbeliever” does not reflect the political reality of Islam.”

This was NOT the conception which Alan Henning had of Muslims. How could he have such a conception? Everything he was listening to on televisión, radio, films, newspapers, and a thousand other sources militated against any truthful understanding of what Islam is. When people like Pamela Geller and Robert Spencer do their utmost to get across what is Islam by studying (hey big surprise here!) Islam, the life of Mohammed, the words of Mohammed – then the Home Secretary of Alan Henning a certain Mrs Theresa May bans them from Britain.

That IS the background to this case of how Alan Henning ended up as a prisoner of the Islamic State which the BBC (true to what I have said above) has just taken to refer to only as the “so-called” Islamic State.

That is the truthful background to how Alan Henning was beheaded. It is still necessary to trace some of these actual forces acting upon him, such as the various “Charities” who were misusing him so dastardly. There is a bewildering number of these Islamist outfits in Britain but they spread across the Globe, all with the hatred of the Jews, that original Mohammedan hatred, at their centre. This may be beyond me at this stage but I will in a later article try to put some sense into the situation.