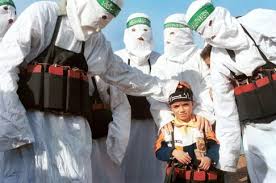 ROBERT SPENCER STATES ON THE FASCIST VOTE IN BRITAIN FOR “PALESTINE”

A “Palestinian” state would not make for a peaceful resolution of the jihad against Israel. It would simply become a new jihad base for newly virulent attacks against a weakened Israel. Do the British MPs know this? Probably not. Would they care if they did? Probably not.

How many times does this have to be done before the political elites get a clue? Or are they so thoroughly bought and paid for that that will never happen? The Israeli withdrawal from Gaza in 2005 was supposed to bring peace. Instead, I and just a few others warned that Gaza would just become a new jihad terror base. And we were right. So also, a “Palestinian” state would become yet another jihad terror base for attacks against a reduced, truncated Israel. The various “Palestinian” factions have never recognized Israel or retreated even one step from their repeated vows to destroy it utterly. Do these clowns even know what “From the river to the sea, Palestine will be free” means?

As long as they’re voting for jihad, how long will it be before the UK Parliament goes whole hog, as it were, and votes 274-12 to adopt Sharia as the sole law of the land? It would “promote community cohesion,” eh wot?

SPENCER IN MY VIEW IS 100 PER CENT CORRECT IN THE ABOVE. PRINT IT OUT AND FRAME IT SO THAT YOU COME BACK TO READ IT!

Britain’s House of Commons voted in favor of recognizing a Palestinian state late Monday in a move that will not alter the government’s stance on the issue, but that carries symbolic value for Palestinians in their pursuit of statehood.

Lawmakers in Britain’s lower house of parliament voted by 274 to 12 to pass a non-binding motion stating: “That this House believes that the Government should recognize the state of Palestine alongside the state of Israel as a contribution to securing a negotiated two-state solution.”

Britain does not classify “Palestine” as a state, but says it could do so at any time if it believed it would help peace efforts between the Palestinians and Israel. Government ministers were told to abstain and the non-binding vote will not force Britain to recognise a Palestinian state.

Nearly 50 MPs were in the chamber to hear pro-Palestinian Labor Backbencher Grahame Morris open the four hour debate which he said was a chance for the UK to atone for its historic mistakes – a clear reference to the Balfour Declaration.

He and party colleagues knew in advance that with the unprecedented backing of the Labor party – as traditionally the political parties do not tell MPs which way to vote in what is supposed to be backbench business – his motion calling for the British Government to recognise a Palestinian State would be passed, probably by a substantial majority.

Several senior pro-Israel Labor party MPs including a number of members of the shadow cabinet – angered by the decision of party leader Ed Miliband and Shadow Foreign Secretary Douglas Alexander to order Labor backbenchers to back the Morris motion by issuing a ‘three line whip’ – were understood to be ready to defy the instruction and abstain on the vote which was due at 10 p.m. UK time, midnight in Israel.

Former Labor Foreign Secretary Jack Straw successfully moved a manuscript amendment which stated that recognition of a state should be agreed as a ‘contribution’ towards a two state solution. He said if Israel had its way and recognition should be delayed until an agreement is reached between Israel and the Palestinians, that – in effect – would amount to giving Israel a veto over Palestinian statehood.

The Palestinians, he reminded the Commons had no say or veto over the establishment of the State of Israel.

A counter argument was put forward by another former Foreign Secretary the Conservative Party’s Malcolm Rifkind who told MPs that it was not possible to recognize a state which has no boundaries, no army, nor a government. The Palestinians he said, currently have two administrations and simply did not qualify for ‘recognition’.

Also he noted wryly, Britain did not recognize the State of Israel until 1950 when its borders and government and been well established….