Hamas and Fatah have no interest in a settlement. Their whole aim in life, their political strategy is to drum up hatred of Israel in order to DESTROY Israel.

This is not accepted AT ALL by Netanyahu. In this regard Netanyahu is interesting. In fact in words he may accept it and in books has stated it.

But our great forebear “Lucy” with all apologies to Moses used very few words indeed because Lucy had the brain of an ape, kind of a monkey, but had the upright gait of a human.

And our “Lucy” got it all going! With action!

So I am cautious about words and plan to use less of them. I think this is good advice:

“Words can be twisted into any shape. Promises can be made to lull the heart and seduce the soul. In the final analysis, words mean nothing. They are labels we give things in an effort to wrap our puny little brains around their underlying natures, when ninety-nine percent of the time the totality of the reality is an entirely different beast. The wisest man is the silent one. Examine his actions. Judge him by them.”
― Karen Marie Moning

I think the recent article by Martin Sherman (google name and “into the fray” makes excellent sense. The Arabs keep firing rockets at Jews, or firing stones at Jews especially at the cars of Jews, they keep building tunnels into Israel to leap out like the proverbial bogeyman to kidnap Jews, and the Jewish talkers are great at words, but cannot do a dammed thing to créate anew reality. 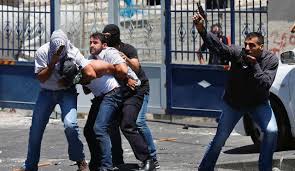 The Antisemites of the world, like Kerry, like the EU Fat cats, rush over to Gaza to set up a fund to rebuild. But it will only get knocked down because you cannot stop the Arabs from trying to obliterate Israel off the map.

Geert Wilders is a great guy. You just want to hear him speak. They guy is so humble and for him words are leading all the time to action.

In his recent interview with Frontpagemag (who hate me) Wilders is so down to earth it is startling. One piece I remember so well. He explains how in his visits to Egypt to name one he found the people so friendly but when it came to Jews and Israel it was immediate hatred.

So they will rebuild it. They will keep hating Jews. They will attack Israel. Israel will knock it down again.

The Antisemites int he West will be happy too. They will hate the Jews even more and drive even more Jews out