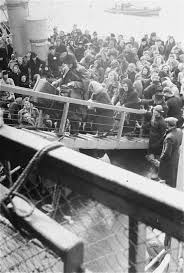 Jewish immigrants landing in New York. The unity between America and Israel does not depend on Obama, or any US elitist President, or even on Jeffrey Goldberg!

I am very much in sympathy with Ari Soffer of Israel National News who deconstructs the message from Jeffrey Goldberg,  over the Obama people reference to Netanyahu as “chickenshit”,  and as a “coward” in relation to the Iran Nuclear Bomb and general threat. I will try to tell you why. I come from kind of a different direction to this. Bear with me though!

I am a Marxist, Leninist, Trotskyist and I feel it is part of my political principles to defend Israel as the Jewish Homeland against whomever.

Goldberg reminds me of something, which is the Lenin attack on empty windbags in 1920. It was the second Congress. If you want to scan this work just google it, under “Left Wing Communism an Infantile Disorder”. It is not a strict parallel with Goldberg but what is!

(I like this extract and I think of Goldberg)

It is with the utmost contempt—and the utmost levity—that the German “Left” Communists reply to this question in the negative. Their arguments? In the passage quoted above we read:

“… All reversion to parliamentary forms of struggle, which have become historically and politically obsolete, must be emphatically rejected” [[__ Rjc: Could be incomplete here; check __]]

This is said with ridiculous pretentiousness, and is patently wrong. “Reversion” to parliamentarianism, forsooth! Perhaps there is already a Soviet republic in Germany? It does not look like it! How, then, can one speak of “reversion”? Is this not an empty phrase?

Look at the last 3 sentences and reflect. Is there not a parallel with many I read on these Jewish blogs, like a Jonathan Ross on Israpundit who attacks Martin Sherman, while the total reactionary who hates me so much, one Yamit82, keeps silent while this Ross attacks the same (outstanding) Martin Sherman

I do not want to be diverted by this nonentity Ross but the issue here is this. Martin Sherman wants Israel to be proactive above all. That is his essence in helping Arabs even financially to leave Gaza and JS.

What does Ross put in place of that “feet on the ground” and proactive Martin Sherman. He is for the Islamic State Fascists overthrowing the Jordan Government. With the Hashemites gone then the Arabs called “Palestinians” will set up their state there (in Jordan). What a fool!

I would say that the Jordan Government, the Kurds above all, and even Assad must be defended against the Theocratic Fascism of Islam. The denonair Ross of course would dismiss that. But then like Sherman I try to keep my feet on the ground.

I see this all the time in my study of the David Icke phenomenon. I notice that they are all, these Israel haters, in that bracket of declaring the end of Israel.

I would point out that the unity between America and Israel does not DEPEND UPON the American ruling class governments or upon the particular elites in power in Israel. It is far deeper than that. I will go into this very soon as I am reading around this from my own Irish emigrant, especially emigrants to America, perspective.

Goldberg is an Israel hating gadfly, very much beloved by the utterly reactionary Harry’s Place which produces something called “Sarah Brown”. And need I say more!

(Begin article for our readers by Israel National News)

In essence, this latest article epitomizes the art of manufacturing news in order to create pressure on Israel, very similar to the eyebrow-raising prominence granted to announcements of new apartment buildings being built in Jerusalem, or to Jews legally purchasing homes in Arab-majority neighborhoods.

The approach of fair-minded individuals to such blatantly manufactured “news” such as this, rather than taking the bait and reacting hysterically to it (in either direction), should be to soberly deconstruct it.

Why does a man like Jeffrey Goldberg create such stories, and what is the subtext to it? What does it mean for there to be a “crisis in relations” when military and economic cooperation is still booming, and when the majority of Americans (reflected in Congress) still firmly support Israel? More fundamentally, even if there were to be a “crisis” in relations, what is Goldberg actually suggesting Israel do about it?

Of course, as I mentioned, the motive behind such stories is to engender fear. The message here is that “America is losing patience” with naughty little Israel, and that Israel must therefore learn to toe the line better and fulfill Washington’s dictates to the letter, instead of God-forbid formulating its own independent foreign policy which may sometimes conflict with that of its ally. It is part of a wider worldview held by a significant portion of assimilated American Jewry, that just as they are besotted with and have tied their very identity to the goldene medina to the extent that they cannot do without it, so the Jewish state must act similarly. Essentially, it is a projection of the exile-mentality onto the Jewish state.

In terms of why such unprofessional name-calling and personal antipathy should even be significant: again this is all part of the “what will they say?” neurosis of the Jew in exile. Relations with non-Jews should not be marked by undue hostility or servility any more than our relations with other Jews, but rather with a level head and a focus on the physical realities we are confronted with, such as shared interests and a firm grip on one’s own red lines (even if the other party in the relationship doesn’t really know his own). That may sound obvious (and it is), but to those riven with inferiority complexes it is asking the impossible; there is nothing more terrifying to the Goldbergs of this world than not being liked (and, incidentally, nothing more spine-tinglingly pleasurable than being accepted as “one of the guys”, to the extent that “they” are willing to badmouth the leader of the Jewish state to you.)

What we are reading in his article then is essentially projection. This kind of antipathy from the non-Jewish world is the worst nightmare to someone like Goldberg, and so he naturally opts to use it as a weapon to pressure Israel into changing its policies. This is a tried-and-tested tactic of the Israeli left and of the Jewish left in the Diaspora, and as the influence of the legitimately-elected political left in Israel wanes, such illegitimate attempts to foist a concessionist agenda on Israel using means outside of the democratic process have predictably increased.

So yes, it is vindictive and petty in an almost childlike way – but Goldberg’s article must be read by anyone striving to understand precisely the self-defeating neuroses a free and independent Jewish state must avoid if it is to remain as such. The Israeli government must not allow these kinds of blatantly political broadsides to influence our own legitimate, internal political discourse, which should be conducted confidently, if cautiously, and with a level-head.

That is not to ignore the harmful impact of such personal antipathy. Of course, a professional relationship on any level is extremely difficult to maintain in the face of personal animosity between parties who are meant to be cooperating.

But if Goldberg is correct that the Obama administration is genuinely considering something as radical as throwing its most dependable ally in the Middle East under a bus because some top officials feel personally slighted, or because Bibi is not an agreeable person to work with, that is simply a reflection of how and why American foreign policy under this current administration will not, and should not, be taken seriously by anyone.