The radio station Talk Radio Europe owned by a Jewish man called Nathan Thomas was hosting the total Israel hater Ken O’Keefe last night. He was spewing out his lies about Israel. It was on the Richie Allen 2 hour daily radio show. O’Keefe was on board the Mavi Marmora hate fest against Israel.

It was lies against Israel from beginning to end. Allen is an associate of David Icke who has such a well known record of hatred against Israel. This Icke associate Allen was employed by top dog in the media world Bill Padley. The whole TRE shebang is linked directly with the BBC. 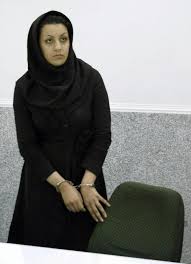 This gente girl hung by Iran last week, and Allen and O’Keefe on Talk Radio Europe had not a Word to say but praised Iran to the skies. What political thuggery!

What is to stop Ken O’Keefe going to Gaza and joining in Jihad against the Jews with Hamas?

What is to stop Richie Allen getting across to Iraq and then he will be in no danger if he joins with the Jihadists in ISIS, which he does not believe exists anyway, and is a figment of our imagination?

If ISIS is then a figment of our imagination and if the beheading is not real as Engdahl (who spoke to Allen two nights ago) believes, and Allen believes and states,  then Allen will be in no danger whatsoever

Bur they do not do this.

They do not travel to join with ISIS which to them is harmless. They sit in well appointed studios and churn out hatred and lies against Israel.

Which leads to another conclusion – it is all part of the Big Lie against Israel that these people spin every hour and every day of their lives.

And it is a lie against the Jews of Israel.

Given our human history that is dangerous is it not! But there Holocaust Denial kicks in.

Does Allen deny the Holocaust?

A good question when for a good part of the interview with O’Keefe last night he was supporting Iran. Allen did not once mention their Holocaust denial and the Holocaust Denial conferences on Iranian soil which we are all so familiar with.

Why not deal with that?

The lies have a philosophical basis. It is called subjective idealism – that Marx, Engels, Lenin and Trotsky fought against.

They START with the ideas in their heads and not with living reality.

So they excluded the Hamas Charter

They excluded the nature of the 1979 revolution in Iran led by Khomeini.

They totally excluded the struggle of the Kurds against ISIS. Not a word!

In its place they told the lies of the UN against Israel.

Iran has gone ahead with an execution of a woman despite an international campaign urging a reprieve.

Reyhaneh Jabbari, 26, was hanged in a Tehran prison on Saturday morning. She had been convicted of killing a man she said was trying to sexually abuse her.

Jabbari was arrested in 2007 for the murder of Morteza Abdolali Sarbandi, a former intelligence ministry worker.

A Jewish man called Richard Millett in February 2012 taped this from Ken O’Keefe at a meeting in Britain:

O’Keefe, who was on board the Mavi Marmara, compared Jews to both the Nazis and to the German people whom, he implies, as a whole collaborated with the Nazis. I have transcribed the final part of his speech below. After referring to “the Jewish people” O’Keefe uses “you” or “your” twelve times to personally direct his rhetoric at the Jews in the theatre. He admits his intent was to inflame:

Did they do enough to stop the Nazis? No, they didn’t. And what are the Jewish people doing right now? Are you doing enough to stop your racist apartheid genocidal state? (applause)

If you think that you are I beg to differ. You have a special obligation brought upon you just like the Nazis brought upon the decent Germans. Good luck to you because the way of Israel, the way of Palestine is the way of the world. And you can mouth at me all you want, good luck to you, because guess what, you are making enemies of all the people, not just me and the falsely accused anti-Semites.” (huge applause)

On Wikipedia there is this sentence about O’Keefe aboard the Mavi Marmora “”We had in our full possession, three completely disarmed and helpless commandos” who were “surrounded by at least 100 men”; “we could have done anything with them.”

That is highly significant. Israel was completely in its rights in blocking the Mavi Marmora from entering Israeli waters and an Israeli port. This was accepted by Steven Gilmour, a colleague of Allen on the TRE radio station, and Gilmour was never a real friend of Israel having given a sympathetic interview with George Galloway.

O’Keefe was allowed to go free by the Israeli Government led then by Ehud Barak, but that was all of a piece with the action of Barak in sending unprepared Navy soldiers onto the boat. That is fact! They were totally unprepared and were as soon as they scaled down a rope overpowered by over a hundred Jihadists who had prepared well in contrast to Barak.

Last night O’Keefe stated that he would kill any Israeli if he was a Palestinian. He did not say, mark you, Israeli soldier, he said “invader” and that means in his parlance any Jew.

There is no way to challenge or reply to this via Talk Radio Europe. I cannot get my head around that this is on a Jewish owned station.