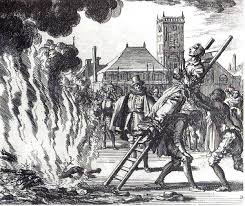 BURNING OF THE JEWS IN SPAIN

This coming Tuesday the present denizens of Spain, namely PP, PSOE (Labour), IU (Stalinists) and others including Podemos are going to do a repeat of the Alhambra Decree.

This was also the Edict of Expulsión. There are very few Jews in Spain or my own native Ireland today to expel. But there is no question about the hatred which these ruling Catholic and Leftist elites have for Jews through their hatred for the Jewish Homeland.

A signed copy of the Edict of Expulsion

The king and queen issued the Alhambra Decree less than three months after the surrender of Granada. This was primarily a decision of Isabella, not her husband Fernando. That her confessor had just changed from the tolerant Hernando de Talavera  to the very intolerant Francisco Jiménez de Cisneros  suggests that Cisneros may well have had a role in Isabel’s decision.[10]  In it, Jews were accused of trying “to subvert their holy Catholic faith and trying to draw faithful Christians away from their beliefs.” These measures were not new in Europe.[11]

Some Jews were only given four months and ordered to convert to Christianity or leave the country. Under the edict, Jews were promised royal “protection and security” for the effective three-month window before the deadline. They were permitted to take their belongings with them – except “gold or silver or minted money”.[citation needed ]

The punishment for any Jew who did not convert or leave by the deadline was death without trial .[1]  The punishment for non-Jew who sheltered or hid Jews was the confiscation of all belongings and hereditary privileges.

So why does 4international insist that the parliamentary decisión of the Spanish this coming Tuesday is a continuation of the Alhanbra Decree … well it because they are voting for “Palestine” which was never Heard of before 1973.

It was then that the ARABS, not PALESTINIANS, decided that to get rid of Israel from THEIR área, they would play the Palestinian card.

So they organise the Palestine State overlooking Ben Gurion Aorport and all else. Does that mean peace? Sure about that?

What happens though if the rockets start raining down on Israel from the high ground of Judea and Samaria. Or if roads in the nearby áreas of Israel are having bombs laid, and a thousand other things to make life imposible for Jews, so they will all leave.

Will the Spanish do anything about that? That is a joke! The Spanish cannot even solve 70 per cent Spanish youth unenployment!!!