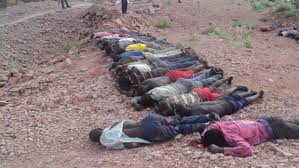 Kenya quarry murders of yesterday morning  by Jihad…Why is Israel not sending arms to Kenyans, Kurds, Nigerians etc. to help fight against the common enemy?

The election on March 17 in Israel means very little indeed. This is because all of the Israeli politicians, part of a political elite, are cowardly, insular, and do not have a single policy to meet the crisis in world imperialism in which Israel is being surrounded by the Islamic Jihad represented above all by the Islamic State, which in turn is promoted by US Imperialism, the EU and NATO. They all aim to dismantle Israel as they did Yugoslavia in the interests of the Jihad

They are cowards! What they should be doing is clear enough. There is no division in Israel between things internal to Israel and things external. The Israeli leaders are bankrupt on both counts.

Start first with external (international). Israel must see its immediate and obvious enemies as being an alliance of American elites and European elites with the Jihad, the latter represented by Hamas, Fatah and Iran. To combat this Israel must state clearly that it intends to arm the Kurds to the gills in order to fight its enemies and to set up their Kurdish states in Turkey and Iran. Israel must send its delegates to the Scots and make clear that Israel will back the Scots with everything they need in order to achieve Scottish independence. Israel must send a delegation to Belfast, meet Northern Protestant delegates there, and aim to create an independent Ulster. Israel must travel to the city of Barcelona and state that it will back the Catalonians with everything to fight the Spanish imperialists to the very end in order to win Catalonian independence. Basques also! This and more. Israel must do this with the greatest of fanfare possible. Create a big stir. Ram these policies right down the bloodthirsty throats of the British and American Imperialists.

That is external. What about internal? The internal cannot be discussed without creating the most direct alliance with the el Sisi Government and Judiciary of Egypt because Egypt is actually showing the way to the Jews as to how the Jews can survive inside of Israel. An immediate statement must be rattled off the presses in Israel that gives the Egyptians full support in the sentencing to death of Hamas Fascist demonstrators and killers.

Moreover in relation to Israel and Egypt Israel must state publicly and with a lot of humility that Israel has been shown the way by el Sisi and the courageous Egyptian Judiciary in the action of condemning to death these Hamas Fascists. The death penalty for Palestinian Arab Fascists of Hamas and Fatah must indeed be restored to Israel. Do this and then sit back and watch Obama and Kerry go berserk. Then say to these British and American Fascists “Bugger off out of our country the historical Jewish state of Israel which existed 3000 years before your state was born”.

The same applies to Israel and Assad, Israel and Putin, and so on. Even with the Assad alliance with Hizbullah and with the Iranian Fascists notwithstanding Israel must make a statement saying that it will support Assad with everything including with arms to defeat the British and US Imperialists and to defeat the Jihadists against Assad. Israel must take the side of Assad unconditionally at same time as the IDF strikes the Iranian Nuclear Bomb. This unconditional support of Assad against the Jihad does not imply for second that Assad is not Antisemitic like all Arab leaders and it does not mean dropping Israeli defense against Assad if necessary.  The very same applies to the defense of Putin in Crimea, Georgia and south Ukraine. Israel must state that it will arm the Ukrainian Russians against the Nazis of the Ukrainian Government that overthrew the elected president a year ago. Nor does this imply agreement with Putin.

That is the only way to fight this election on March 17. The rest is to follow these creeps like Netanyahu, Likud, Feiglin and Naftali Bennett into the abyss and endanger Israel to the Jihad and US Imperialism.