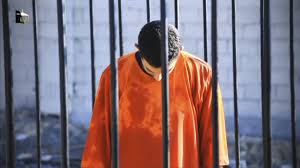 Head bowed in submission. Later he was on his knees in submission. Before he had been marched around under direction of a “Director”. Theme of Islamic State in this film production is SUBMISSION…submission to the on high! Most simple explanation is that he was promised he would live if he cooperated. He was shot in the head and flames were added by technology (this technology is really simple and according to Thomas Wictor in this case crudely applied) This explanation is OPPOSITE of conspiracy thought. It offers the SIMPLEST explanation! I fight Holocaust Denial conspiracists like David Icke by seeking the simplest explanation for phenomena.

FELIX QUIGLEY SAYS…This is the only explanation that makes sense about the burning of the Jordan pilot. The whole thing was staged by the Islamic State director (film director…or somebody with some knowledge of same). The question is why he did not fight back fiercely if he knew he was going to be burned alive. He was a military man. He was an Arab man. So why cooperate. That has never been explained until now…so give this a read.

An extract “The terrorists had a Muslim pilot. They could make a statement about their own fearsomeness, the vulnerability of the aircraft they hate, and the danger of “betraying Islam.” It could be the greatest recruiting tool of all time—as long as the pilot were controlled. A military man, Lieutenant al-Kasasbeh would almost certainly fight if he were told he was going to be burned alive. What would he gain by cooperating?

His life. I believe he cooperated and mimed being burned to death because he was told that he would be spared and kept prisoner. Someone else suggested that he cooperated in exchange for a more merciful death by gunshot. I don’t think that would guarantee his cooperation.

Italian security contractor Fabrizio Quattrocchi was kidnapped in Iraq by al Qaeda. When they took him out on April 14, 2004, to murder him for a propaganda film, he fought, he tried to tear off his hood, and he shouted, “I’ll show you how an Italian dies!” before being shot.

The video of the murder was useless for propaganda purposes.

More recently, a defector from the Islamic State explained why he left the group.

He said he found the courage to attempt an escape after seeing a Kurdish fighter beheaded.

“I decided to risk my life to escape after I witnessed a wounded, captured Kurdish YPG fighter publicly beheaded. He was about my age, but unlike me he was extremely brave,” said Omer.

“He spat on every jihadist around him. He shouted slogans about Kurdish freedom and Abdullah Ocalan. I had never seen anyone so brave in my life. His fingers were cut yet he shouted insults against the jihadists. He was finally beheaded from behind to suffer, and salt was put on his half-cut neck to make him die in agony, but he did not give up until he painfully died,” he said.

Imagine if Lieutenant al-Kasasbeh had fought every attempt to put him in the cage. What if he’d spat and shouted insults? This couldn’t be risked, given that the Islamic State is not likely going to get another pilot anytime soon. Islamic State fighters are sadistic barbarians, but their leaders have rational, long-term plans. That’s why they staged the burning. It was the only way they could be assured that Lieutenant al-Kasasbeh would cooperate.

They wanted him to look penitent as he burned, holding his head in his hands, and they wanted him to sink to his knees in defeat, begging Allah for forgiveness. If they’d drugged him, he wouldn’t have been able to follow the director’s instructions. He had to be motivated, which means they promised him that he would live. Also, if he’d actually been burned alive, he may have toppled the cage in his involuntary death throes. Since they were going to use CGI flames, they needed to have the cage perfectly stationary.”
http://www.thomaswictor.com/why-would-the-islamic-state-fake-the-video/