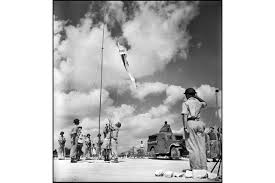 The election in Israel next Tuesday (March 17 2015) is an example of how the pressure of world Antisemitism (Muslim, Stalinist, Fascist Left and Christian) bears down on the tiny state of Israel and how the present leaders are not able to fight it but in many ways adapt to it.

The following two sides must be understood. Firstly the Jews are not responsible for one micro atom of Antisemitism in the world. Antisemitism is not the responsibility of a single Jew – ever! Secondly the Jewish people must find a leadership that can fight this Antisemitism or the Jews will be defeated.

Israel is a very tiny country. It is less than the size of Munster. Anybody who talks about a “Greater Israel” is therefore lying and is Antisemitic (patently obviously) through those lies.

There you have it. The great distortions in this election in Israel are an inevitable product of this pressure of Antisemitism on the tiny state of Israel

[Some like Livni say be nice to Mr Obama and his Muslims and they will in turn be very nice to you. The result of this as the 2005 Disengagement from Gaza showed is the opposite – the very opposite – and many Jewish and Arab also lives are lost]

[Some like Lieberman say do create a Palestinian state but do it on terms that the Jews can live with. This idea is very widespread. It has fatal results as the unfinished war against Hamas last year showed. No war can be left half finished]

[Then there are all of the roughly patriotic Jewish side sometimes misnamed as the “Right” and best known for Likud and Netanyahu and more lately Bennett. In general their heart is in the right place but they cannot ever translate any idea into action and the result is wild divisions in their ranks]

We are Trotskyists. We have a proud history. This election will solve nothing and yet is a serious moment. We say that the Netanyahu Likud and Bennett wing of Israeli struggle must be preserved by defeating the Livni/Peres axis. The hands of Livni and Herzog need to be kept away from state power because that state power as was the case with Barak and Sharon in 2005 (with a servile Media) can be a deadly weapon