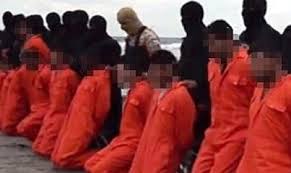 El Sisi is different. Unlike Netanyahu he is not simply a talker. I will never and can never forgive Netanyahu because he watched Hamas and Islamic Jihad bombs rain down on Sderot for 7 years without acting thus sacificing Jews. El Sisi acted the next morning after the horrific murder of poor Egyptian Copts in Libya by Islamic State savages.

I wrote 3 days ago the following:

“Libya was a relatively settled and prosperous country with many improvements made on the basis of its oil development market by Colonel Gadhafi, who also to his credit had a strong line in assistance to the impoverished Africa and Africans south of Libya
That all came to a shuddering end when NATO, America and leaders like William Hague attacked Libya placing Jihadists in power. The above and much more is the result.
We as a Trotskyist organization said at the time that leaders like Gadhafi had to be defended against the Jihad. There is no if and but. To block the deadly Jihad it is necessary to defend all secular leaders against the Jihad.
This certainly applied to Milosevic, but also much wider, namely the Shah against Khomeini, Gaghbo in Ivory Coast, Ben Ali in Tunisia, Mubarak and now el Sisi in Egypt, Assad and of course Gadhafi
Under Obama, under Cameron, under Sarkozy – we descend into a dark night.