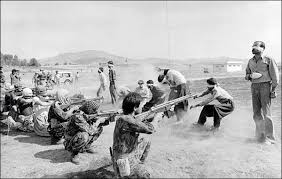 Obama is the most dangerous. We saw his role in that he went to war against Muammar Gadhafi by completely sidestepping Congress, which is AGAINST THE AMERICAN CONSTITUTION.

On the very night of his election Obama was already proceeding to rule with the same strategy, side-stepping Congress. The whole line of the Media and especially the BBC was why are these horrible Republicans of Congress such horrible people and such unreasonable horrible people.

Obama with nothing to lose in his last 4 years is going to rule in this way. It is called Bonapartism and if people do not know what that means they should find out because it is the ante-chamber to Fascism.

Note well. It is not Fascism. It is the preceding period.

The American situation is so different to the European because the American Revolution still lives in the principles of the Republican Party.

But Romney did not articulate that nor could he.

Romney and the Elite not once referred to Obama going to war on Muammar Gadhafi thus side-stepping the Constitution, which states clearly that a President of America must get consent of Congress. Stephens in Benghazi was transferring guns to the Muslim Brotherhood fighting Assad…Note no Congress again! Romney dropped that in Debate 3 following the intervention of Crowley in Debate 2.

This was a step on from Clinton in Yugoslavia. There Clinton created the false red flag operations of Racak and Srebrenica, to frame the Serbs, to create the alliance with the Jihad (Izetbegovic), and to rush Congress behind the war on the Serbs (6 months bombing of Serbia)

But Obama moves again. Obama had moved from Clintobn. No red flag needed. He just dismisses Congress, dismisses the Constitution.

Obama is above the Constitution. He parades his gawky wife and his gawky children and makes his personal life the issue. The feminist traitors to Feminism lap it up.

But Obama is not Hitler. The role of Obama is to open the door to a Hitler American leader.

It will emerge out of the economic crisis. There will be many forces at play. There will certainly be what is not the left, that is those like www.wsws.org who support Obama the Islamist, and who create Antisemitism in everything they do.

And the future Fascism will have as a central component Antisemitism and Anticommunism, because the role of Fascism is to end all opposition, and to make the capitalist crisis survivable for capital. The Republican Party is filled with Anticommunism so Fascism in America will come from there too I am sorry to have to say.

The situation is far more complicated and even more serious than Daniel Greenfieldpresents it.

In that way Greenfield, and people like Belman on Israpundit whom we mentioned yesterday, actually disarm the Jews, and disarm Israel, in the face of Fascism in the United States. That after all is the essence of the alliance of Obama with the Muslim Brotherhood.

In this election the Republican Party ran two wholly inoffensive blue state Republicans on a platform of jobs at a time when the economy was everyone’s chief concern and the incumbent had absolutely failed to fix the economy. And they lost.

The Monday — or Wednesday — morning quarterbacks will have a fine time debating what Mitt Romney should have done differently. The red Republicans will say that he should have been more aggressive and should have hit Obama on Benghazi. The blue Republicans will blame a lack of outreach to Latinos. Some will blame Sandy, others will blame Christie and many will point to voter fraud. And they will all have a point, but the makings of this defeat did not happen in the last two weeks; they happened in the last two years.

Mitt Romney won the primaries because he was electable. But, as it turned out, he really wasn’t electable after all. Not when the chief criteria of electability is having no opinion, no point of view and no reason to run for office except to win. Not when the chief criteria of being a Republican presidential nominee is being able to convince people that you’re hardly a Republican at all.

Romney was a star political athlete who had an excellent training regimen and coaching staff. But to win elections, you have to change people’s minds. It’s not enough to try hard or to fight hard; you have to fight for something besides the chance to round the bases. You have to wake people up to a cause.

The stunning 2010 midterm election victories happened because a conservative opposition loudly and vociferously convinced a majority of Americans that ObamaCare would be harmful to them. And then that fantastic engine of change was packed away and replaced with political consultants who were all focused on seizing the center and offending as few people as possible. But you don’t win political battles by being inoffensive. And you don’t win elections by avoiding conflict.

Is it any wonder that the 2012 election played out the way it did?

The Democrats in the Bush years were about as unlikable a party as could ever be conceived of. They were hostile, hateful and obstructionist. They spewed conspiracy theories at the drop of a hat and behaved in a way that would have convinced any reasonable person not to entrust them with a lawnmower, let alone political power. And not only were they rewarded for that by winning Congress, but they also went on to win the White House.

When the Republican Party sold out the Tea Party, it sold out its soul, and the only driving energy that it had. And there was nothing to replace it with. The Republican Party stopped being the opposition and became a position that it was willing to reposition to get closer to the center. Mitt Romney embodied that willingness to say anything to win and it is exactly that willingness to say anything to win that the public distrusts.

The elevation of Mitt Romney was the triumph of inoffensiveness. Romney ran an aggressive campaign, but it was a mechanical exercise, a smooth assault by trained professionals paid to spin talking points in dangerous directions. But, what if the voters really wanted a certain amount of offensiveness?

Romney very successfully made the case that he would be a more credible steward of the economy. It was enough to turn out a sizable portion of the electorate, but not enough of it. He tried to be Reagan confronting Carter, but what was remarkable about Reagan, is that he had moments of anger and passion; electric flashes of feeling that stirred his audience and made them believe that he understood their frustrations. That was the source of Reagan’s moral authority and it was entirely lacking in Romney. And without that anger, there is no compelling reason to vote for an opposition party.

The establishment had its chance with Mitt Romney. The former Massachusetts governor was everything that they could possibly want. Moderate, bipartisan and fairly liberal. With his business background, he could make a perfect case for being able to turn the economy around. They had their perfect candidate and their perfect storm and they blew it.

The Republican Party has tried playing Mr. Nice Guy. It may be time to get back to being an opposition movement. And the way to do that is by relearning the lessons of the Tea Party movement. The Democratic Party began winning when it embraced the left, instead of running away from it. If the Republican Party wants to win, then it has to embrace the right and learn to get angry again.