We covered the issue of the murder of Fatima Abdallah before. (How can a girl kill herself by battering her head on a coffee table? Everything is conceivable, but add the family circumstances to that and the whole situation stinks)

These Muslim girls are in continuous danger inside a cocoon of repression. Of course there are many loving Muslim families, the great majority indeed, but the overall context is one in which these Muslim girls are locked into the vicious system of Islamic tradition and law.

The remarkable thing is that it is Pamela Geller with others like Robert Spencer who is the main campaigner for Muslim girls, and the left is silent

Geller asks where are the leftist Women’s Libbers when these girls need help?

Or where is the left?

Also remarkably Geller was prepared to stump up 8000 dollars to pay for an autopsy but they would not meet her on that! 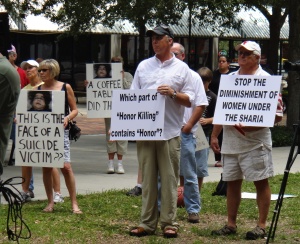 The honor-killing cover-up of Fatima Abdallah in Tampa, Florida is a gross miscarriage of American law  and justice. It is the triumph of the sharia over American law. We have been fighting to have the case re-opened for months now. Honor killing cover-up in Florida.

Tampa Police and the Medical Examiners office ruled Fatima Abdallah honor killing a “suicide” by beating  her own head against a coffee table until she died. Tampa Rescue called the TPD explanation illogical and said that she looked like someone beat her up really bad. There was a history of systematic abuse by her family. Fatima was quoted as telling a neighbor, her brother did “unspeakable things to her.”

The latest explosive development in this case shows that a Tampa Police CSI tech admits that there was a “fear of Muslim reprisal” in the woman’s death. In Florida and communities across America with high Muslim populations, gender aparthied and murdering Muslim women is preferable to offending Muslims or insulting Islam. That is how far down the rabbit hole our society has gone.

Back in July, I spoke to the office of the country’s leading medical examiner, Dr. Michael Baden, after submitting a formal request that he review the cover-up in the Fatima Abdullah case. Dr. Baden refused to review. When I offered to raise the money to pay for a forensic analysis (upwards of $8,000), that, too, was refused. Such is the fear that grips the elite in America.

When we rallied back in June, we promised we would not back down. And we won’t. We will not rest.

Here’s the latest from David Caton:

Florida Family Association (FFA) now has direct evidence that officials with the Tampa Police Department are intimidated by the possible involvement of religious creed in the death of the Palestinian woman named Fatima Abdallah.

The Tampa Police Department claims that Fatima Abdallah killed herself by repeatedly beating her head against a coffee table.   FFA and numerous other organizations call that assertion preposterous.  Florida Family Association contends that Fatima Abdallah died as the result of an honor killing and not an accident.  FFA’s full report on the mishandling of the death of Fatimah Abdallah is posted here at Floridafamily.org

Florida Family Association wanted more documentation to support our private investigator’s report so we sent an email to Shelby Garman.  When Florida Family Association asked Shelby Garman by email to confirm her request she did.  Click here to read her reply and email property validation information that documents she sent the email from the Tampa Police Department.

This Crime Scene Technician’s statement and request verifies what Florida Family Association has alleged all along that the Tampa Police Department and/or the Hillsborough County Medical Examiner Office were intimidated by the possible involvement of religious creed in the death of Fatimah Abdallah.  It appears that some officials feared Muslim reprisal, feared media attention if the case became public and therefore decided to promptly call this violent death an accident without any further investigation beyond the incident date.

If law enforcement agencies are unwilling to properly investigate and bring charges in violent crimes that may have been perpetuated by religious creeds it will undermine our public safety and severely change our value system.

THIS ISSUE OF FATIMA ABDALLAH IS RAISED BY PAMELA GELLER RIGHT AT THE TIME WHEN OBAMA PULLS OUT OF AFGHANISTAN, THUS CEMENTING A RELATIONSHIP BETWEEN US IMPERIALISM AND SHARIA LAW IN AFGHANISTAN, INDEED WIDER THAN AFGHANISTAN, WORLD WIDE.

Any kind of accident is possible, but if this young Muslim woman Fatima Abdallah died as a result of an accident, then it would have to be in the category of highly unusual. Given then that it has to be classed as highly unusual, in order to do justice to this now sadly departed young Muslim woman no stone should be left unturned to find out what really happened. We owe that to this young woman. Her life seems to have been very sad, no real voice was allowed to her in life, we should make sure she has a voice now at last. Please listen to Pamela Geller on this. I think she is in the right.

Does being a Muslim mean you can get away with murder?

Stand against Islamic supremacism, gender apartheid, and Islamic law in American law enforcement and courts. Call out the feminists and the Tampa Chief of Police, Jane Castor.

The irony is thicker than blood. Jane Castor, Tampa Chief of Police — scene of the misogynistic Abdallah cover-up in submission to Islam — is speaking to a feminist crowd on what? The upside of the dehumanizaton of women? The hypocrisy is crushing. NOW, instead of fighting for women, has taken up genocidal jihad flotillas.

Let’s call out the feminist claptrap about women’s rights when they stand silent as Muslim girls are murdered here in America, and stand silent in the face of gender apartheid, clitorectomies, forced marriage, child marriage under the sharia in Muslim countries.

What has the hypocrite group NOW done to alleviate the suffering of women living under the boot of Islam? Nothing. Their silence is sanction. What have they done to help Muslim girls here in the US living in terror in devout households?

This Friday we are going to protest the NOW conference taking place in Tampa, scene of the Fatima Abdallah cover-up. The honor killing was classified as an accidental suicide. Medical examiner Laura Harris ruled Fatima’s honor killing an accidental suicide by banging her head on the coffee table (there was no blood on the coffee table). The Tampa police department went along with this horrible crime.

Fatima Abdallah’s “mouth was bloodied by a blow, and at the left corner of her mouth is an angular cut/incision/indentation, which only could have been made by a blow.” Also, “her left eye orbit was broken, and her left eye socket was blackened, suffering a blow causing hemorrhaging of blood about the eye.” And “her right arm had contusions at the front inside of the elbow, and at the shoulder near the front armpit, consistent with being grasped forcibly by human hands.”

Where are the feminist liars and imposters? Is a Muslim woman’s life worthless? Is it politically expedient to allow enforcement of the sharia, so as not to offend Muslims?

The 2011 National NOW Conference is being held June 24-26 in Tampa, Florida, at the Embassy Suites Tampa – USF/Near Busch Gardens. 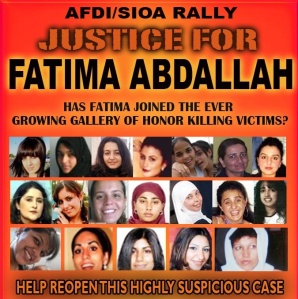 Behind the Veil: Islam and Women’s Rights

With the recent burqa ban in France, there has been much talk about the role of women in Islam. Is Islam inherently sexist? Can a woman actually choose to cover herself? As feminists, should we have a goal of helping to liberate Muslim women? What is the role of women in the recent Arab Spring? Workshop panelists include a human rights activist who has traveled extensively in conflict regions; an American of Palestinian and Egyptian descent outspoken on feminism and the Middle East and North African uprisings; and a civil rights legal fellow at the Council on American-Islamic Relations in Tampa. Come to an honest and eye-opening dialogue about the role of women in Islam, and learn how both Muslim and non-Muslim feminists can work together to further feminism.

Hundreds of Atlas readers have written to Dr. Vernard Adams of the Hillsborough County Medical Examiners. Keep writing. And call, too: his phone number is 813 914 4500. Each of us should call to notify him of our next email campaign to the medical examiner’s commission.

We must rally again. Please come if you can