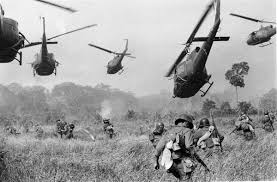 US war against Vietnam basically a peasant country! Jews must break from US Imperialism NOW!

I have watched the latest video from Caroline Glick. It is interesting to me in this respect. Glick is so emotional she is almost crying. Glick’s biggest problem is that she feels that the US has betrayed Israel and this makes her almost cry in pain. (www.carolineglick.com)

But this tells us about the bankruptcy and utter danger to Israel of Glick. The US has never been the friend of Israel.

Is the US an ally of Israel?

A chronological look at the evidence

The basic problem which lies behind so many of these speakers on the pro Israel side is that they take a non-class or above class position on America.

The emerging American bourgeoisie was revolutionary and the Declaration of Rights still remains.

It would be absolutely lethal for Jews to put themselves in alliance with THAT. But Glick tries to do just that.

If Glick read this she would react “You are a commie”

Just read again what Gil White researched on this score.

However there is a large group of pople in America who remain supportive of Israel and of Jews, opposed to Islam. That is the great American people.

Glick should not be disappointed that the American ruling class has become the enemy of the Jews, because they were always the enemy of the Jews. Remember Antisemite Henry Ford. George Bush removed Saddam who although no friend of the Jews was still a major secular block to Iran. Bush put Hamas in power helped by Condi Rice who insisted on that election in Gaza.

I listened to Glick very carefully. I do not like her politics at all. She seemed to be almost in tears.

This is wrong. Israel and Jews are a powerful nation and all is possible in this war.

Israel simply has to do what Brian Boru did in Ireland. Brian took the ground on which the Danes were standing and held on to it. Same with Israel and Gaza plus Judea and Samaria. Israel must take the ground on which these Antisemites are standing and hold on to that ground. If these Arabs do not want to be full of hope for the Jewish state then help them to a wonderful life in Holland or in Germany.

The great mission of the Jews. Root Antisemitism out of the Jewish Homeland forever and do not let political pygmies like Obama or Kerry stop them doing so.