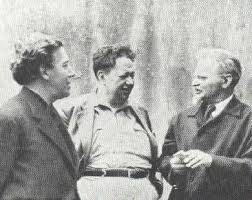 Leon Trotsky with Diego Rivero in the 30s

“As a result, the political “Right” has found itself unable to respond effectively to the pointed and pertinent question from “left-wing” adversaries: “So what’s your alternative?” With no comprehensive countervailing paradigmatic position to promote or defend, the “Right” found itself gradually forced to give way under the weight of this onerous question, and to adopt increasing portions of the failed formula it had rejected.”

The defence of Israel as the Jewish Homeland is also the war internationally against Islam, and it must also be the war against political elites in the world in general, especially a necessary war against the Vatican (bit not against the Christian or Catholic people who themselves are being betrayed by the Churches and the Vatican in their own struggle against Islam)

As if all that were not hard enough remember also that we live in a period of deepening crisis in the international capitalist system where the drive in the world is towards class dictatorship, morphing into Fascist states. The latter raises the issue, as it has always historically done, of growing Antisemitism. This Antisemitism has something new, a coalition of US Presidents, of anti-Marxist Fascistsm of Islam and all against Jews and Israel.

Sherman performs a useful role in pointing to the bankruptcy of “Right” as well as “Left” in Israel. He is aware that this absence of principled leadership poses the greatest dangers for Israel, for the Jews of Israel, as well as the Jews in the Diaspora, including in America who are losing their Jewishness, and are being absorbed into the forces of American Imperialism.

However Martin Sherman tries to fix the problem from within the Jewish ideology of Judaism (more or less) and he cannot go outside of the Jewish experience, towards Trotskyism.

Sherman with many others is correct in identifying the two factors, geographical and demographic, as being central issues.

Sherman proposes paying Arabs in Palestine who want to leave and create a future for themselves a notable grant which may well be appealing.

This however, ALTOUGH 4INTERNATIONAL DOES NOT OPPOSE IT, is a little bit of sidestepping of the issue.

These are issues that are far more important than paying these “Palestinians” to find a home elsewhere. That is a tactic that CAN be used but it is only a tactic. The concept of the Jewish Homeland and Nation must be advanced far more as a priority. I notice that Sherman was given support by a character called “Curious American” who advances the Palestinian Fascist cause continually. That is the danger.

4international is also opposed to all concepts of A B or C including the hundreds of variations as advanced often by that centrist Jew Ted Belman. 4international says to Belman state your ground and fight for it.

Lay down the basis. The International People laid down the law in the early 1920s. Jordan is the Jewish Homeland, and still is. Certainly is Golan, Gaza, and Judea and Samaria, as well as Israel as it is today. All that was stolen from the Jews by World Antisemitism. Sinai was won in rightful struggle.

Towards that position we hold and along the way we are prepared to advance tactically. We may accept temporary compromise but on principles never veer from.

Only a Trotskyist Party can advance both tactically and strategically, both concepts which are in a unity and conflict of opposites. The conflict between the two have to be kept inside of the unity.

We are in a new period. We do not want to be messing around with bank balances. We want to advance a revolutionary and a strategic programme.

A/ Only Jews live in Israel. All others, that is non-Jewish, are there by invitation, they are guests and if they understand that they are guest they can be honoured guests.

C/ The struggle against Fascism, Racism, Antisemitism today is meaningless if the above concept of Israel is not fought for. That is what distinguishes 4international as revolutionaries today, and as being against anti-Marxist leftist pro-Fascists…