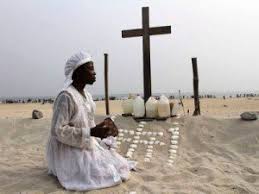 I blame the BBC and all of those I have met over past years, and fought with me, sometimes working to exclude me, who have been hiding the real nature of Islam for the plight of these poor Nigerian girls abducted into the forest by these SAVAGES because Islam no matter about the BBC lies is a SAVAGE political ideology. These girls are suffering and paying the ultimate price for the apology for Islam and lies for Islam by people like you see in the BBC. Note in these short paragraphs below the BBC refers to these savages in Nigeria as being “MILITANTS”. That is a carefully chosen Word by the BBC to deflect from the SAVAGERY of Islam. It is Islam that is responsable for the horrible plight of these girls and it is NOT the incompetent Nigerian Government. Islam Islam Islam.

It is thought that the militants took the girls to the Sambisa forest near the Cameroonian border.

Parents and vigilante group have gone there to help search for the teenage girls.

Borno, Yobe and Adamawa states in north-east Nigeria have been under emergency rule since last May.