I oppose totally the vote in the Irish Dail on Wednesday night last to recognise a Palestine State. Why is this such a big issue anyway? It is big because it gives power to a major lie that has hit humanity in general. That is that there are a people called the Palestinians and that they have always existed. The reality and answer to this lie is that up until 1948 the Arabs in Palestine were not calling themselves “Palestinians” at all and did not even like to be called that name or anything to do with “Palestine”. The ONLY people calling themselves that were Jews and usually called Palestinian Jews. The Arabs called themselves well—Arabs!

The second part of this big lie is that the leader of the 1948 war against Israel was a man called Hajj Amin el Husseini and only 3 years before this leader was in Germany leading in the murdering of 6 million Jews. All mention of Hajj Amin el Husseini is removed from all reports and writings in Ireland on this issue.

There is one further issue. That is Israeli leadership. It is bankrupt. The Israelis and the Jews are now a people without a leadership which can match up to the challenges of the present and the coming struggles.

The Israelis are led by elites when they must be led now by revolutionaries.

I say this most definitely. There is only one way forward in the midst of this almost incredible crisis for Jews and Israel (Yes I know there are Israelis who do not care or do not pay attention to these votes) But they are wrong on that as well. These votes matter greatly.

Remember that the American ruling elites are always hostile to the Jews and have kept Jonathon Pollard in prison now for 30 years.

All that Pollard did was to give information to Israel about dangers to Israel from Iranian threats to the existence of Jews on this earth, information that the American elites were not passing on, a criminal act in itself. And Obama hates Jews totally.

The Jewish elites are betraying Jews as we speak. There is a man in Ireland called Alan Shatter. He is a Jew in the Dail and he did not oppose this vote in the Dail. HE COULD BUT DID NOT VOTE AGAINST IT.

This means that a new leadership must be built in Ireland which will stand in the traditions of revolutionary socialism of Lenin and especially of Leon Trotsky.

And the same must happen in Israel because I am totally dismayed by the sheer bankruptcy of the Israeli elites, such as Netanyahu, Lieberman and Bennett, while there is a distinct traitor class leadership around Livni and Labour as well as Lapid, the latter now being eclipsed by these events.

In fact now the only policy that makes sense and that is being advanced by we Trotskyists on 4international is that Israel must immediately in Ireland call for ULSTER independence, the destruction of the Good Friday Agreement that brought the terrorist sectarians of Sinn Fein into power north and south,

That means in essence building our Trotskyist 4international…the following is taken from the Adams twitter page and shows a photograph taken in the Dail where Palestinain Arabs had met with Sinn Feiners. I think the woman in the yellow coat is called popularly “Mary Lou”,  Adams is in the centre and on the very left is a real Israel hater who used to represent Monaghan 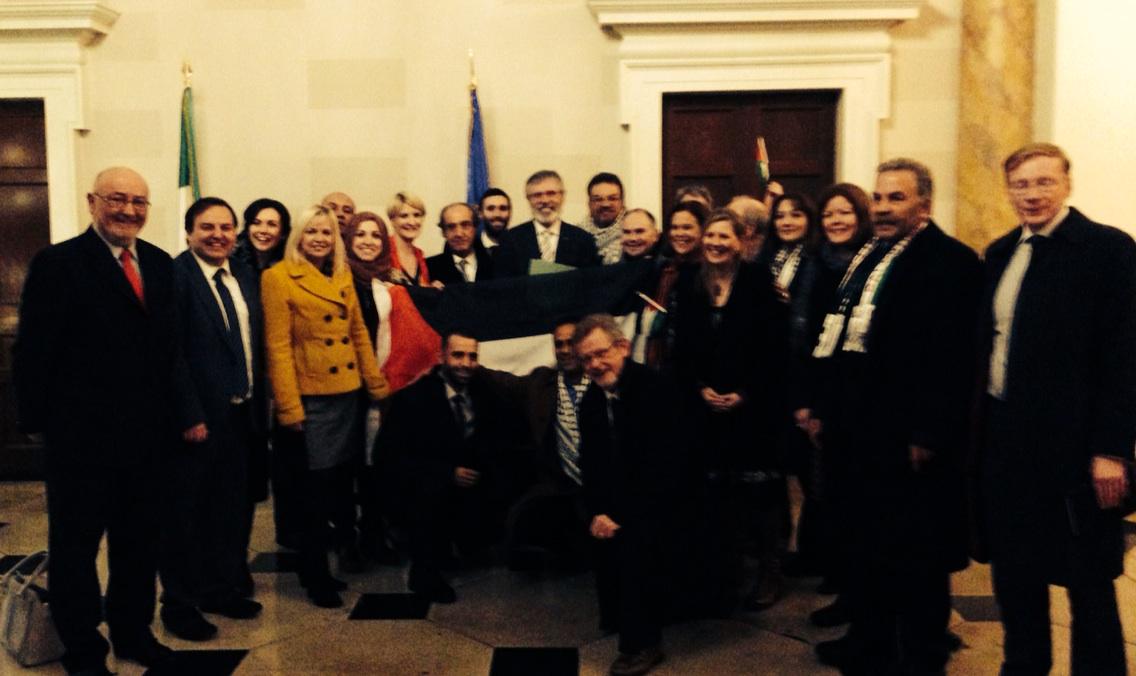