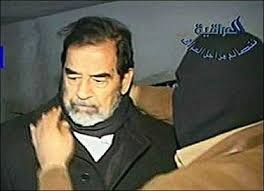 The Bush/Blair/Aznar war on Iraq in 2003 was disastrous for Jews, Saddam was secular and his removal by Bush opened the door to present Iranian dominance and greatly endangers Israel in this very moment! Sharon opposed this horrific world episode!

A very big issue in this election is Israeli foreign policy and whether Israel is really an independent country especially in ideology as well as in physical reality? The premier example of this in recent times is when Sharon took a position of disagreement with Bush over the 2003 Iraq War. Not enough attention has been given to that, not by supporters of Israel who also happen to be like sheep following a particular line, and certainly not by Antisemites in Israel, the Arab world and the west who want the very opposite of the truth. The Israel haters like David Icke who are simply organs for the Iranian Antisemitic Press TV want to label “Zionism” as being reactionary. But Sharon did oppose the Bush 2003 war on Saddam!

Indeed, the truth is that a very big section of Israeli society were opposed to the Bush war on Saddam and this is most striking because the Jews of Israel on many scores had many accounts to settle with Saddam and indeed with the whole of the Iraq ruling elites, never mind the Baathists. There is a long history of Antisemitism in Iraq and among Iraqi Arabs against Jews and of course Israel. Yet a great section of Israeli Zionist society were very opposed to the Bush NeoCon war on Saddam in 2003. You also have to include Zionist opposition to the Tony Blair and Aznar role in that war as well. Although it is never talked about it is one of the most glorious episodes in Zionist history and is of immense importance today.

This historical record must be brought forward. It ties in as well with the reactionary role of the Israeli elites towards their position on Yugoslavia especially on Milosevic, also on their horrific and hopeless attitude towards all the events of the Arab Spring.

Although Sharon was utterly opposed to the 2003 war on Saddam and made his position well known to the American and other elites THE KEY THING IS Sharon did not publish this for the masses – neither the Israeli masses or the world masses. But the record states nevertheless that Sharon and a big section of the Israeli people opposed the war on Saddam

This article from the Jewish (historically socialist leaning) “Forward” magazine and website is the very proof that we need and this must be made as widely known as possible. The article is not an academic issue but relates very closely to every issue internationally today, and here I venture to suggest Mubarak, Gadhafi and now Assad – but also Putin

The silence in public of Sharon was the real problem and something of an historical tragedy. He was right but he needed to speak out boldly. That is the essence of real independence.

In all of the blogs and all of the leaders coming out of Israel today I see no sign that there is this necessary courage. We tell the truth here and we wait and see…

Publicly, Sharon played the silent ally; he neither criticized nor supported the Iraq adventure. One reason for his relative silence was Washington’s explicit request that Israel refrain from openly backing its invasion of an Arab country or in any way intervening, lest its blessing damn the United States in Arab eyes.

But sometime prior to March 2003, Sharon told Bush privately in no uncertain terms what he thought about the Iraq plan. Sharon’s words — revealed here for the first time — constituted a friendly but pointed warning to Bush. Sharon acknowledged that Saddam Hussein was an “acute threat” to the Middle East and that he believed Saddam possessed weapons of mass destruction.

Yet according to one knowledgeable source, Sharon nevertheless advised Bush not to occupy Iraq. According to another source — Danny Ayalon, who was Israel’s ambassador to the United States at the time of the Iraq invasion, and who sat in on the Bush-Sharon meetings — Sharon told Bush that Israel would not “push one way or another” regarding the Iraq scheme.

According to both sources, Sharon warned Bush that if he insisted on occupying Iraq, he should at least abandon his plan to implant democracy in this part of the world. “In terms of culture and tradition, the Arab world is not built for democratization,” Ayalon recalls Sharon advising.

Be sure, Sharon added, not to go into Iraq without a viable exit strategy. And ready a counter-insurgency strategy if you expect to rule Iraq, which will eventually have to be partitioned into its component parts. Finally, Sharon told Bush, please remember that you will conquer, occupy and leave, but we have to remain in this part of the world. Israel, he reminded the American president, does not wish to see its vital interests hurt by regional radicalization and the spillover of violence beyond Iraq’s borders.

Sharon’s advice — reflecting a wealth of experience with Middle East issues that Bush lacked — was prescient. The American occupation of Iraq has ended up strengthening Iran, Israel’s number-one enemy, and enfranchising militant Shi’ite Islamists. A large part of Iraq is slipping into the Iranian orbit. Iraq’s western Anbar Province is increasingly dominated by militant jihadi Sunnis who could eventually threaten Syria and Jordan, the latter a strategic partner and geographic buffer for Israel.

All these developments harm vital Israeli interests. This past summer, Israel fought a war against two militant Islamist movements supported by Iran — Hezbollah in Lebanon and Hamas in Gaza — that were enfranchised and legitimized in their anarchic countries thanks to Bush’s insistence on hasty and ill-advised democratic elections “in this part of the world.”

Had Sharon made his criticism public, citing the dangers posed to vital Israeli interests, might he have made a difference in the prewar debate in the United States and the world? Certainly he would have poured cold water on the postwar assertions of critics, like professors Stephen Walt and John Mearsheimer, who have fingered Israel, the American Israel Public Affairs Committee and pro-Israelis in the administration for instigating the war. Ayalon, incidentally, was directed by Sharon to warn all Israelis visiting Washington not to encourage the American scheme for war in Iraq, lest Israel be blamed for its failure.

There were, of course, neoconservative types in Israel who did encourage the United States to occupy Iraq and advocated democratic elections wherever possible in the Middle East. But there were also many Israelis, this writer included, who spoke out openly and publicly against the American scheme.